Here you will find helpful articles on ancient coins and archaeology and general updates on notable additions to our website. Please feel free to leave any comments. Make sure to bookmark this page and check in regulalry for updates. 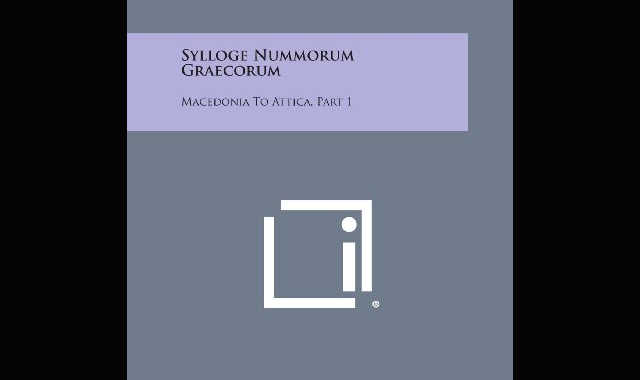 Sylloge Nummorum Graecorum Macedonia Attica Part 1 by American Numismatic Society ('ANS') is one of 11 volumes which documents the collections of ancient greek coins of the American Numismatic Society. This particular volume documents Part 1 of the collection of Burton Y Berry, an American diplomat and coin collector, who donated his collection of ancient Greek coins to the ANS. This SNG volume is commonly referred to as SNG Berry.

Sylloge Nummorum Graecorum, commonly abbreviated as 'SNG' is a project to publish illustrated catalogues of ancient Greek coins in public and private collections around the world. Alongside the British Museum Catalogue of Greek Coins, the various SNGs are primary references for researching and attributing ancient Greek coins.

SNG Berry covers a range of coins from ancient Macedonia to Athens. It is not as comprehensive as other collections covering the same coinage such as SNG Alpha Bank or SNG Copenhagen, or SNG Kikpe (in respect of bronze coinage). As it covers less coins than other SNGs, it is by no means an essential reference. However its smaller size means it is much easier to digest and skim through looking for a particular coin making it a handy quick guide reference if one is content with simply finding and comparing similar coins instead of an exact match.

The 2013 edition is in paperback format. It is easier to use than the large folio formats used for other SNG ANS volumes, though this is comes at the expense of aesthetic quality. With its thin spine, the paperback edition would be hardly noticeable on a bookshelf.

Naturally, the paperback edition is cheaper than the out of print hardcover format. This is a distinct advantage.

A large draw back however are the low quality plates. The plates are printed on ordinary paper not glossy paper. The printing quality is low. The photos on each plate are small and very dark. The darkness and low quality printing obscures the crucial detail on many of the coins making them indistinguishable from other coins in the same series. One often cannot rely on the plates and must refer strictly to the written descriptions instead. Unfortunately, this flaw is fatal to the objective of the standardised layout of SNGS which has plates and descriptions side by side which encourages the simultaneous use of both for speedy identification of a particular coin.

In conclusion, it is considered that there are suitable alternative SNG references to SNG Berry. If one is adamant about purchasing this volume, then it is recommended that the out of print hardcopy format, though hard to find, is well worth the additional effort and expense.